Attorney H. Michael White, Jr. was born in Charleston, South Carolina in 1967, and grew up in Moncks Corner, SC. He graduated from Furman University in 1989 with a B.A. in English and then attended the University of South Carolina School of Law, receiving his Juris Doctor in 1992.

Moving to Mount Pleasant, SC in the fall of 1992, H. Michael White, Jr., had the privilege of working for a couple of well-respected law firms in Mount Pleasant from 1992 to 1996. He remains indebted to the Sottile & Hopkins Law Firm and the Campbell Law Firm for those years of training.

In October of 1995, Michael married Lisa Roof White, beginning a union by which is he deeply blessed. In July of 1996, an opportunity arose for Michael to “hang his own shingle” (i.e., he opened his own law practice). Time really started to fly by: in December of 1998, his first child was born, Danielle White. Lauren White joined the family in February of 2001. Haynes White entered the scene in January of 2004, and Zachary White emerged in September of 2006. Michael and Lisa are greatly blessed by these little ones and thank the Lord for “filling our quiver”.

The White family attended East Cooper Baptist Church (ECBC) for over fifteen years, receiving sound doctrine in the faith and strong friendships that remain to this day. The family now attends a fairly young, new church, Providence Presbyterian, where the family hopes to serve others as they were served at their former church.

If you require the services of a committed, experienced attorney with deep roots in the Charleston SC community, please contact H. Michael White, Jr. 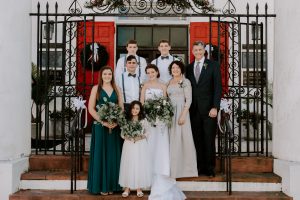